FLUSHMATE has been proven to be effective and reliable. Commercial and residential marketplaces have embraced FLUSHMATE technology due to its superior performance and ability to conserve more water than any other water closet flushing mechanism.

We stock all of the most popular two piece toilet replacement tanks for American Standard, Kohler, Gerber, Crane, Mansfield.

We must have the following information when ordering a replacement Flushmate tank.

We also stock all the parts for the Flushmate tanks and flush handles for American Standard, Kohler, and Gerber. 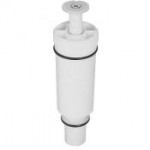 Flushmate is discontinuing the 501B series tank. For more information about the replacement tanks follow the link provided here.